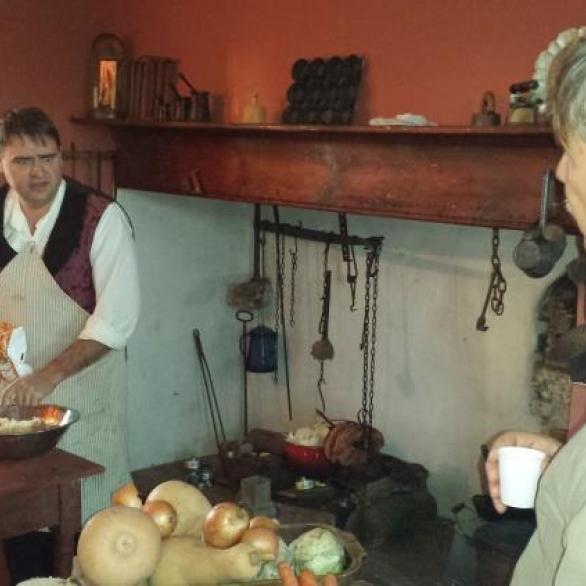 For its final event for 2016, the Historic Daniel Lady Farm repeated its involvement as a participating site in the annual Holiday House Tour and Tasting sponsored by the Inns of the Gettysburg on Dec. 10.
The Lady Farm again proved popular as more than 300 tour participants filed through to see the home set for Christmas 1863, while the front room also presented the scenario of the field hospital that was in the house to treat wounded and dying Confederate officers during the Battle of Gettysburg.
Not far from the house, behind the barn that was a field hospital for rank-and-file wounded, a New Jersey Boy Scout troop was encamped for the weekend.
Holiday House Tour organizers were excited about the turnout at the Lady Farm and have invited GBPA to be a participant in the 2017 tour and tasting.

The early part of the evening was dedicated to remembering Board of Directors member George H. Lomas, who passed away in September. Lomas was an iconic figure among sutlers and historic reenactors, a groundbreaker as the hobby of reenacting historic America blossomed with the centennial observance of the Civil War in the 1960’s.
Lomas founded The Regimental Quartermaster sutlery in Gettysburg, one of the nation’s foremost providers of historical reenactment gear and was one of three co-founders of the Gettysburg Anniversary Committee with its organized annual reenactment of the Battle of Gettysburg.
Reminisces of George included an interview he did with Mifflin Guard reenactor and video producer Rich Mendoza. The interview included humorous comments about Lomas’ hair being disheveled at the moment. This was particularly funny as George had a reputation for asking people if they have a comb as he was about to be photographed. At each banquet place-setting was a comb.
Another GAC reenactment co-founder, Adams County Commissioner Randy Phiel, added his memories of working with George in the early days of the GAC and the massive 135th anniversary reenactment in 1998 that brought together 17,000 reenactors, the nation’s largest ever historical reenactment.
Pennsylvania State Representative Daniel Moul presented a state legislature condolence citation to Susan Weiklien, a friend and business partner of Lomas.
The GBPA is preparing a memorial stone honoring Lomas in the memorial garden of its Historic Daniel Lady Farm on Hanover Road in Gettysburg to be dedicated during the GAC reenactment weekend in July. Many sutlers and reenactors from the eastern U.S. who got to know George will be in town for the GAC event.
The banquet also featured a show of thanks for a group of volunteers dedicated to maintaining the lawn around the Lady house and barn as well as the Memorial Garden and the parking area. Members received certificates of appreciation from GBPA. Their donated time in 2016 approached 1,000 hours.
Speaking on behalf of the volunteers, Richard Biedel said the group was not only proud of the maintenance job, but the expansion of useable space gained from brush removal. Biedel noted that this past summer, the grassy areas were as lush as one would find on a country club golf fairway.
Kirk Davis, Vice-President of Operations, reported the Historic Daniel Lady Farm is growing as a camping site for Boy Scout troops from the Mid-Atlantic region. A total of 984 scouts spent a weekend at the farm, up 178 from 2015. Many devoted time to farm improvements, including gardening and help erecting a split-rail fence across the front of the farm and the Memorial Garden.

Davis announced that the farm is now open year-round, allowing Boy and Girl Scout troops to take on the challenge winter camping.
The farm is recognized as an approved campground by the Boy Scouts of America. More information about the scout camping program is available at www.gbpa.org/Scout-Camping-on-the-Lady-Farm.html.
New historical programs are being planned for the farm in 2017, including musical evenings on Fridays from Memorial Day weekend through Labor Day featuring individuals and groups from the region.
Davis said historical reenactment groups and military units will be able to camp on the farm FREE OF CHARGE on weekends if they provide living history demonstrations for visitors.
The farm will continue to welcome individual living historians wishing to present their impressions to the public.
Questions about the camping program, scout or reenactor, can be directed to Kirk Davis at 717-338-1776, or by email at info@gbpa.org.