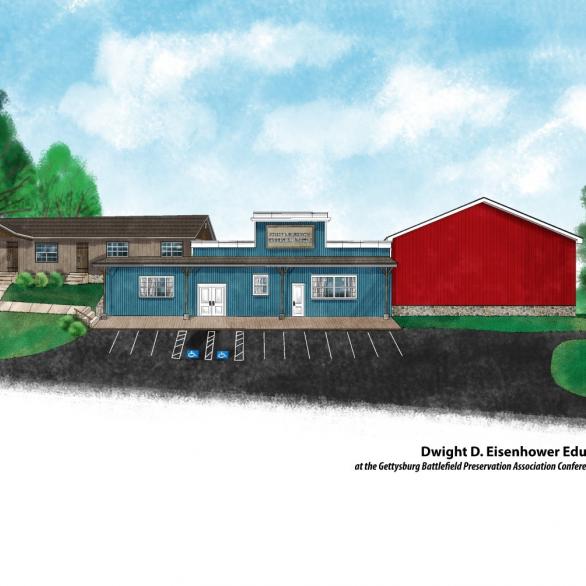 The GBPA Board of Directors has adopted an exterior design for the planned Dwight D. Eisenhower
Education Center on former retail property adjacent to the Historic Daniel Lady Farm on Hanover Street.

The Board acquired the property in 2017. The primary meeting room is mostly completed. Contracts are
being let out for septic and electrical work.

Since 1959, as development threatened to overwhelm much of the hallowed ground, the Gettysburg

Battlefield Preservation Association (GBPA) has worked to keep those images of Gettysburg clear in the
minds of Americans.

In 2019, the GBPA celebrates 60 years of working to preserve the most sacred soil in the United
States.

To help celebrate its 60th Anniversary, the GBPA is dedicated to completing and opening the new
Dwight D. Eisenhower Education Center, named in honor of the 34th President of the United States, an
early member and ardent supporter of the GBPA.

The Eisenhower Education Center will include a research library that will hold an extensive collection of books and other media on American and Civil War history and the Battle of Gettysburg.

Additionally, the center will house: Jeanette C. Hershey All-Purpose Conference Room. Named in memory of a major GBPA benefactor, the conference room will hold up to 100 people for educational seminars on topics ranging from battlefield tactics, Civil War medical treatment and procedures, and the Underground Railroad to name just a few of the planned topics.

Camp Letterman Museum. Our new museum will be dedicated to increasing educational
opportunities about American history, particularly the American Civil War and the battle of Gettysburg.
The museum will house Civil War artifacts, including many items from the nationally-renown J. Howard
Wert historical collection, one of the largest privately-owned Civil War collections in the country. It also will
feature many rotating presentations on such topics as President Dwight D. Eisenhower, the history of agricultural and rural life in Adams County, the Underground Railroad, and Civil War medicine and emergency care as well as the advancements in medical procedures that were ushered into use especially after the battle at Gettysburg, to name a few.

Cliff Arquette retail shop. The shop is named in memory of this charter member of GBPA who was a Gettysburg business owner and is best known as comic Charlie Weaver, a fixture on national television from the late 1950s until his death in 1974. He opened the Charley Weaver Museum of the Civil War in Gettysburg, which later became the Soldiers National Museum, which closed its doors in 2014
The center also will house offices and meeting space for the GBPA.

It is hoped the center can be opened late this year.

The Board of Directors is working on a Capital Fund Drive to complete financing of the building work.
Contributions as specific levels will bring the donor a GBPA 60th Anniversary polo shirt or hat.