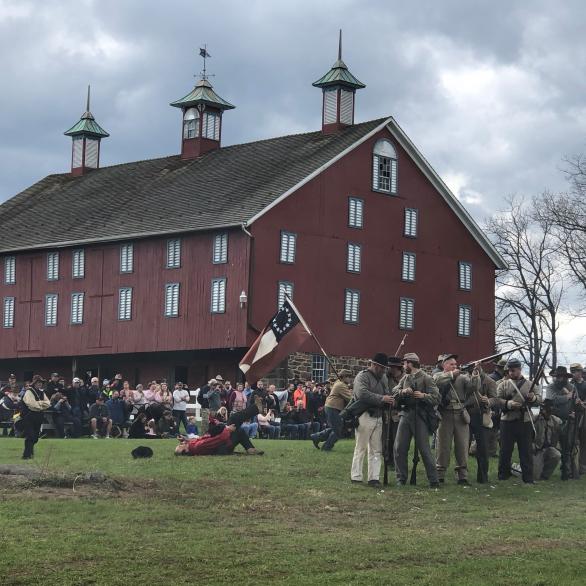 The Gettysburg Battlefield Preservation Association is awaiting responses from the Straban Township
Planning Commission and the Township Supervisors after presenting them with a letter detailing its objections to proposed development plans between Route 30 (York Pike) and Route 116 (Hanover Pike).

The development would devour property that was known as the Wolf Farm west of GBPA’s Historic Daniel
Lady Farm. It is one of the last undeveloped portions of battlefield and aftermath property around the Gettysburg National Military Park.

The property is threatened by the proposed development of a new Wal-Mart super store and additional
commercial structures along with access roads.

1. The Confederate line as it assembled for the assaults of East Cemetery Hill and Culp’s Hill.

2. The location of Confederate artillery on the Wolf Farm that engaged Union forces on East Cemetery Hill and Culp’s Hill.

“The GBPA has previously stated its concerns about the impact of commercial development bordering the
Park and the Daniel Lady Farm,” states the letter. “Both the Park and the GBPA are concerned that future plans respect the historic view-shed from the Park and the Historic District and that insensitive development does not close off the opportunity to interpret the sacrifice and contributions made here by soldiers, doctors, nurses and civilians of Gettysburg.“

The letter emphasizes the property is part of the “hallowed ground” described by President Abraham
Lincoln in his Gettysburg Address of November, 1863.

“At the very least, the developer and the Township need to complete a serious review of the historically
significant events and resources impacted by the development,” the GBPA letter states. “As part of that review, the developer should produce a map overlay of historic features and resources and incorporate a plan to preserve, interpret and mitigate damage to those resources.”

Both the Historic Daniel Lady Farm and the Wolf Farm were important staging areas for Confederate
troops and artillery throughout the battle for Culp's Hill and for the Confederate evacuation at the battle's end.